What to Eat in Hawaii 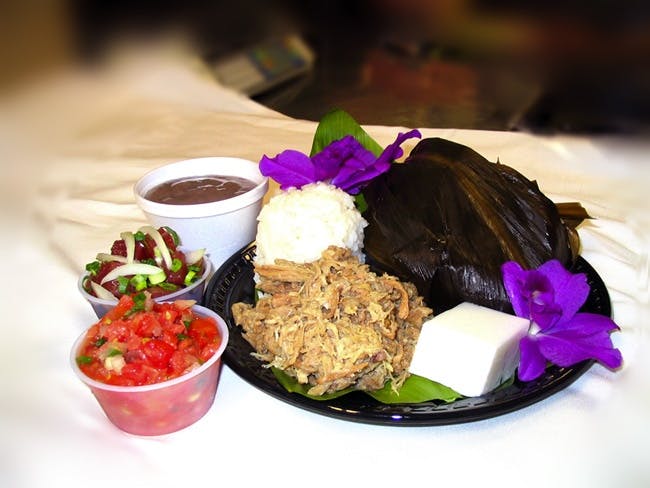 Going to Hawaii? Aside from the beaches and surfing, you’re likely curious to see what the native foods are in Hawaii. While we do have lots of the same foods you’ll find on the mainland, there are some Hawaiian delicacies here that can’t be found anywhere else. With a diverse food culture throughout the islands, don’t miss out on all of the gastronomic delights that this beautiful state offers. From luaus to dinners on the beach, you are sure to love the food here.

First, a little background: The Polynesians first arrived in Hawaii between 200 and 500 A.D., and when they did, they brought with them all varieties of plants, fruits, vegetables and animals, plus they fished in the oceans to find a wide range of native marine life that could complement their dishes. Today, you’ll see many of those first foods as staples on the menus here. Here are some of the basics.

Hailing as far back as the 1700s, this dish is made with cured raw salmon, diced tomatoes and onions. Whalers originally landed in Hawaii bringing salted fish. They salted their fish heavily to preserve it on long journeys. The mixture of ingredients is massaged into the salmon, which is how it gets its signature taste. It’s usually served cold with a side of poi.

This low-calorie paste is created through mashing the taro root. This “life force,” as the Hawaiians refer to it, can be mixed with a variety of staples, such as meat and vegetables. Special tools or mixers are used to pound the poi until it is well ground up, to produce optimum taste and texture. Poi always tastes best when it is at least two days old.

If you love smoked pork, you’ll love kalua pig, which is wrapped in ti leaves to keep the flavor sealed in. Slow cooked for hours, you will enjoy this succulent, juicy meat that is perfect when entertaining a whole crowd.

This phrase translates to “leaf leaf,” and is made by layering ti and taro leaves with pork and fish. The slow cooking goes on for many hours in an underground oven. The result? A smoky, flavorful, melt-in-your-mouth taste that can’t be beat. While it’s possible to eat the taro leaves, just leave the ti leaves on your plate – they are essential only to the creation of the meal because they act as a tenderizer.

This is essentially octopus wrapped in taro leaves and basted with coconut milk. This sweet dish has a savory undertone that can be substituted with chicken if octopus is not your favorite.

You’ll know if this fruit is ripe if it’s yellow and not green. Akin to the taste of a sweet potato, this originated from the Hawaiians who introduced the fruit from Asia and the South Pacific. It’s a versatile fruit, though. It can be steamed, baked, broiled, marinated, stir fried and deep fried.

If you like raw fish, such as tuna or octopus, you’ll like poke, which is diced up into small pieces and flavored with salt, onions, garlic, chili pepper, sesame seed oil and soy sauce.

On your trip, don’t hesitate to sample all the native Hawaiian foods for the ultimate taste of the local culture. Make it a point to seek out these foods while on an excursion from Hoku Hawaii Tours!