The Majesty of Halona Blowhole 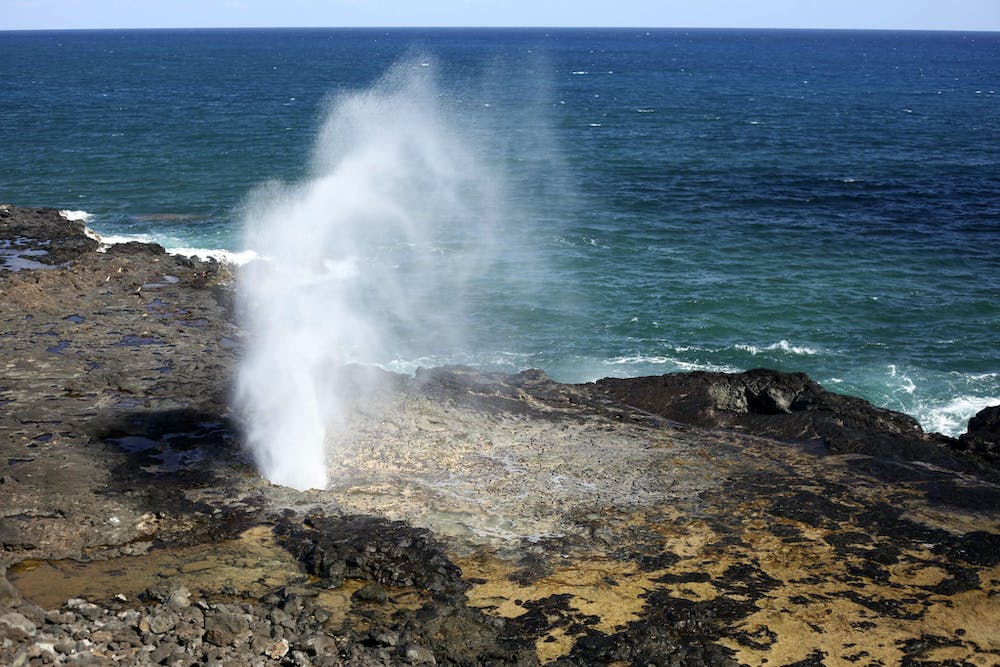 It’s not every day you get to see a powerful spray of water shoot 30 feet into the air. But at Halona Blowhole, you can witness this natural phenomenon on Oahu any time you want. It’s free and it’s simple, but the majesty of it all will impress young and old. This molten lava tube is a natural occurrence formed from the eruptions of volcanoes thousands of years ago. The lava tubes are like fingers jetting into the ocean underneath the surface, providing fodder for jet streams of water to push up through a large hole and voila! A blowhole more powerful than any whale’s. And it stands to reason that the bigger the waves, the bigger the spray.

You can visit the Halona Blowhole at Halona Beach Cove, AKA the “Peering Place,” – a small sandy beach perfect for swimming when the surf is gentle. If you’re an old movie buff, you may remember this place from the famous love scene in “From Here to Eternity, a 1953 movie starring Burt Lancaster and Deborah Kerr. Hey, you may even spot the Hawaiian green sea turtle, an endangered species on Hawaii.

Below Halona lies the Ka Iwi channel, an unpredictable ocean channel that’s arguably the most dangerous on the planet. A word of caution: since there are no lifeguards at Halona, you are visiting at your own risk. This means you should never hop in for a swim when the surf is kicking up, and be careful when walking down to the beach areas. In fact, it’s a good idea to water shoes, sandals or sneakers when making the trek, as the route is quite steep and rocky. When in the water, stay in safe, shallow areas, as the waves are pretty enormous and crash against the sides of the bay, which isn’t all that wide. It’s sounds like a no-brainer but DON’T go near the blowhole. Trust us, people have done it on dares or just to get a good picture, but it’s really not worth the extreme risk to your life to do so. The blowhole has claimed the lives of three people so far since 1927. Dozens more have been hurt. Instead, stick with the lookout as the safest spot to witness Mother Nature in all her glory. Don’t worry, the views are amazing and you’ll get awesome photos.

To get to Halona Blowhole, you just have to drive 10 to 15 minutes from Waikiki, off the Kalanianole Highway and north of Hanauma Bay. Not only will you get a good view of the blowhole itself, you’ll also get a panoramic view of the coastline, as well as the smaller islands of Molokai and Lanai. If you’re visiting during the winter months between November and March, you may even glimpse whales frolicking in the ocean nearby.

Check us out when you want a full tour of Oahu, including the Halona Blowhole lookout. Our tours are led by guides that are funny and knowledgeable! The Halona Blowhole is actually a stop on our Circle Island Tour, so book today.