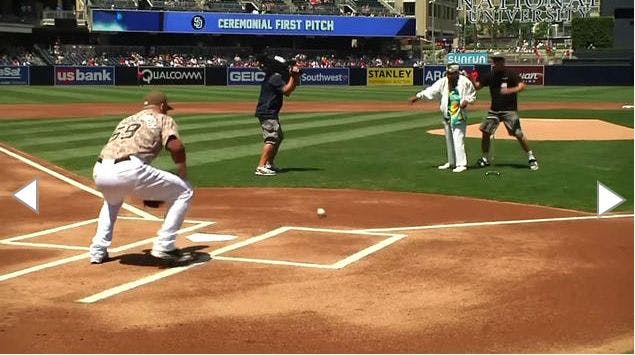 The oldest living veteran from the Pearl Harbor attacks, Raymond Chavez, is 103 and the oldest survivor of the Dec. 7, 1941 attack on Pearl Harbor. He threw the ceremonial first pitch this past week before the San Diego Padres game at Petco Park. He served on the U.S. Navy USS Condor; with him to throw out the first pitch was Jack Paris, who was in Tokyo Bay aboard the U.S. Navy battleship USS Colorado during the Japanese surrender that brought World War II to a close.

You can see the “wild pitch” here.

The chance to throw out the first pitch is one readily and whole heartedly given to veterans, something the Padres have a big tradition of doing at home games on Sundays. This is just their way of honoring the men and women who serve or who have served in the nation’s military. Chavez threw to reliever Kevin Quackenbush; when it was Paris’s turn, he threw to coach Dave Roberts. They both got a standing ovation for their service when the crowd of 30,000 got to their feet in thanks.

The Padres weren’t too lucky that night, however, as they lost to the St. Louis Cardinals, making it impossible to sweep their third series this season. At least the ceremonial pitch drew some positivity!

A little Bit More About Chavez

Want to know more about this 103-year-old wonder? Chavez is a widower who worked in his landscaping business till the age of 96. He didn’t even give up his driver’s license till he was 99! He credits no alcohol, cigarettes or red meat to his health, but that’s not all. After a fall a few years back sidelined him, he got motivated to get better after his daughter introduced him to a gym. When he started, he was a mere 93 pounds. Today he’s put on 20 pounds of muscle weight with body fat of just seven percent. He goes to Personally Fit gym in Rancho Bernardo twice a week and works with his trainer closely. He no longer feels the pain that came with his fall, and he can now walk, stand and sleep so much better than before.

Born in 1911 in San Bernadino, CA, Chavez spent his childhood in San Diego where his family owned a flower business. He married in his early 20s and joined the Navy at age 27, boarding the USS Condor at Pearl Harbor as a minesweeper. He was on the boat that day at 3:45 a.m. on Dec. 7, 1941 when his crew spotted the periscope of a Japanese sub. The sub was bombed and business carried on as usual. That is, until the raids began at 8:10 later that morning when he was home asleep in next door Ewa Beach. He says he will never forget running outside to see all of the harbor in smoke.

He made it back to his ship and was on duty the next week and half. He retired from the Navy in 1945. Last week’s ceremonial pitch was just one of many appearances he still makes to remember that fateful day in 1941. You can explore more about the history of Pearl Harbor with Hoku Hawaii Tours’ Pearl Harbor tours. Call today to witness the USS Arizona Memorial and much more for yourself.