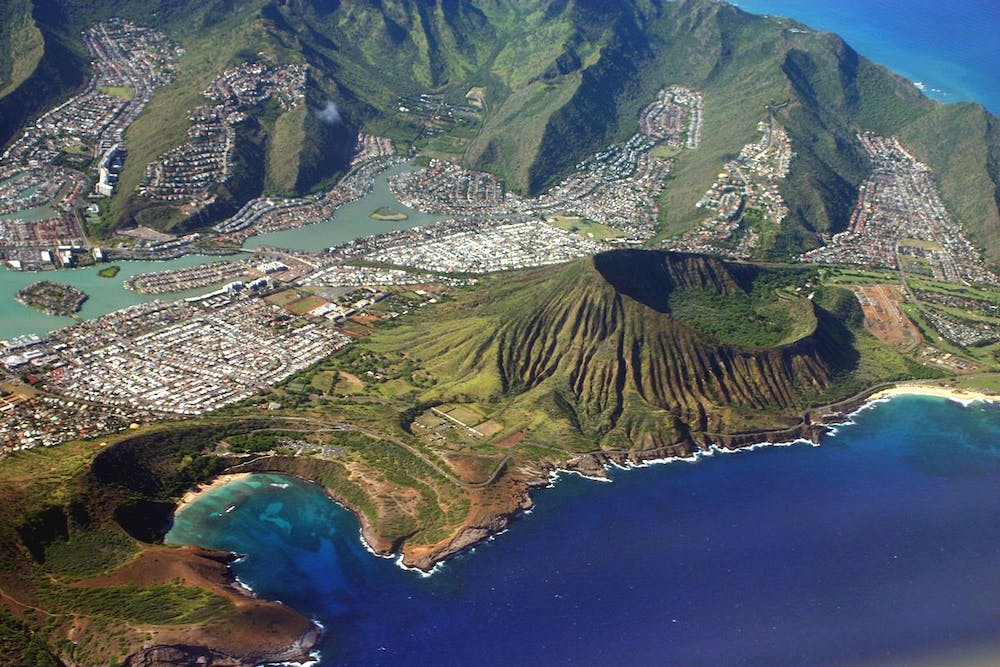 Image Source: “Oahu from air2” by No machine-readable author provided. Mbz1 assumed (based on copyright claims). – No machine-readable source provided. Own work assumed (based on copyright claims).. Licensed under CC BY-SA 3.0 via Commons – https://commons.wikimedia.org/wiki/File:Oahu_from_air2.jpg#/media/File:Oahu_from_air2.jpg

When visiting the glorious island of Oahu, you can’t miss a hike at Koko Head Crater. This tuff cone measures 642 feet in height, and although smaller than its sister tuff cone Koko Crater (1,208 feet) it remains a popular destination on the south shore. Attracting all ability levels, you can view the hiking trail leading up to the peak even from far away.

There’s a beautiful lookout point that gives you panoramic views of the crater and the rest of the island: you just have to hike up 1,048 stairs and railroad ties that have been there for six decades. This is how workers got critical supplies to the military bunkers at the top. Mind you, the stairs here are steep so this is not for the faint of heart. There’s also a short, bridge-like section that could make people a bit nervous, as they are essentially railroad tracks positioned above the ground. Hike to the right for a different, easier way to get to your goal. Inside the crater are horse stables – yes, horse stables! – as well as the serene Koko Crater Botanical Garden that grows a variety of cacti and succulents.

Also referred to as Kohelepelepe

Which means “labia minor” in Hawaiian, Koko Crater has a peculiar legend attached to it that may not be a story for kids. According to this legend, the volcano goddess Pele had a sister called Kapo (goddess of fertility) and she was said to possess a magical “flying vagina.” In an effort to save her sister Pele from getting attacked by the pig god Kamapua’a, she threw her vagina to Koko Head and a crater resulted.

The trails on Koko Head

Are well-kept and plentiful. In fact, you can hike directly up to the rim of the crater, which makes for the ideal place to catch a sunrise over the Pacific Ocean. Along the way, you can branch off and witness other feats of nature, such as the Halona Blowhole and Halona Cove. You can also check out the L?na?i Lookout where you may glimpse Lanai off to the southeast if the weather is just right. However, despite the weather on any given day, you can always see the closer Molokai. Sandy Beach is also located near here, a popular spot for surfers and kite flyers thanks to the strong trade winds. You’ll love it here if you’re into extreme sports; casual sunbathers and swimmers will want to go elsewhere.

Defines the eastern portion of Maunalua Bay in the south end of Oahu; to the west is Portlock in Hawai’I Kai. Koko Head features three depressions or old vents, the largest of which makes up the popular and beautiful Hanauma Bay. Koko Head is not active; in fact, its last eruption was between 30,000 and 35,000 years ago.

To learn more about the natural wonders of Oahu, give us a call at Hoku Hawaii Tours to book a Circle Island Tour, which has a stop at the aforementioned Halona Blowhole.