Summit of Mauna Kea in Hawaii: Protests over Telescope 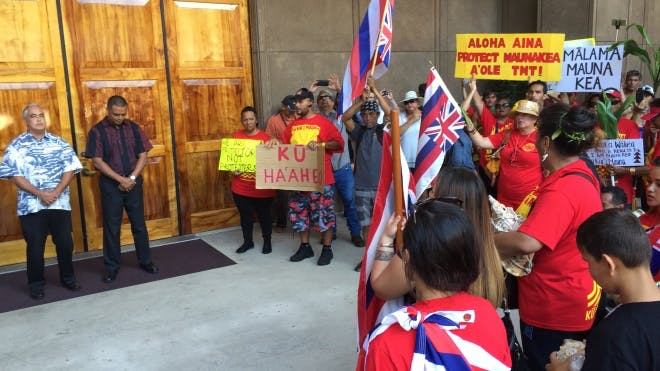 The end of July brought seven Hawaii telescope protesters to the summit of Mauna Kea, only to be arrested over a new rule that limits access to this mountain thought to be sacred. It all happened in Honolulu at the end of July. The protestors were hauled off to jail for ignoring an emergency rule to prevent camping gear on the mountain. These marked the first efforts at enforcement since the rule went into effect July 10, approved overwhelmingly by the state Board of Land and Natural Resources.

Essentially, the rule restricts access to Mauna Kea during certain hours at night, and also prohibits people from bringing in camping gear. It was brought into effect due to the many protestors that were attempting to block construction on the telescope. Police showed up at about 2 a.m. when the leader of the protest, Lanakila Mangauil, and his group were deep in prayer. While some people listened to officers to leave peacefully, seven stayed behind and refused to leave the premises.

So why are these protestors so upset? These opponents are against the construction of a 30 Meter Telescope at the summit of Mauna Kea — land that many Native Hawaiians consider to be sacred. They are challenging a permit that would allow the telescope to be built on conservation land on the Big Island, according to Yahoo! News. On August 27, Hawaii’s Supreme Court began listening to this case about the construction of one of the largest telescopes ever to be built in the world.

Opponents say that Mauna Kea is one of Hawaii’s most important cultural and natural sites and should be preserved. Proponents say a telescope is necessary to continue scientific advancements in the field and to learn even more about the universe. Astronomers love Mauna Kea because its summit reaches about 14,000 feet above the clouds, offering a clear view of the sky nearly every day of the year. The University of Hawaii sub-leases the land that sits at the summit of Mauna Kea, reserved for this telescope project.

This isn’t the first time construction was stopped due to protectors. Back in April of this year, dozens of protesters were arrested for impeding progress of work crews. This week’s hearing by the Supreme Court comes as the result of a bypass of the Intermediate Court of Appeals. The addition of this telescope would serve to enhance what is already the world’s largest astronomical observatory, with telescopes serving eleven countries. The telescopic power on Mauna Kea alone is 15 times greater than that of the Palomar telescope in California and 60 times greater than that of the Hubble Space Telescope, says the Institute for Astronomy at the University of Hawaii.

A visit to Mauna Kea in Honolulu is a must. Heading on over to Oahu on your travels? Book a tour with Hoku Hawaii Tours and see some of the must-see sites there.