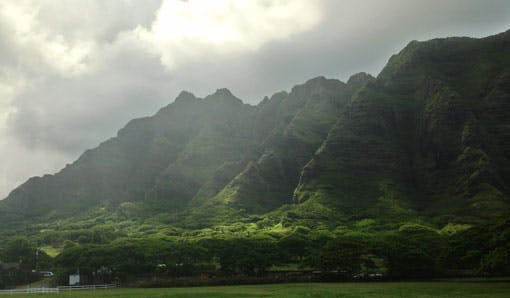 Perhaps you’ve always wondered how Hawaii got its name, or what the state bird is. We’re here to answer all those little questions below. Hopefully you’ll learn some valuable tidbits to share with family and friends!

Flag: Horizontal stripes (eight of them), in white, red and blue to represent the three major islands of Hawaii. The British Union Jack (symbolizing when the islands were under British rule) in the upper left corner.

Motto: Ua mau ke ea o ka aina i ka pono, which translates to: The life of the land is perpetuated in righteousness.

Size: Located in the northern Pacific Ocean, the Hawaiian islands rank number 47 out of 50 states in terms of size.

Volcanoes: There are eight major and 124 minor islands that comprise Hawaii, and they were all formed when volcanoes erupted. Mauna Loa is the biggest active volcano on the planet, with a summit that reaches 13,675 feet up.

Rainfall: Mt. Waialeale on Kauai holds the distinction of being the rainiest place on the globe, getting a yearly total of 486 inches.

Natives: The earliest inhabitants of Hawaii hailed from Polynesia. They came over in canoes up to 1,400 years ago from Southeast Asia.

Economy: Tourism is Hawaii’s main economic growth factor, with agricultural diversification and cultivation of flowers coming second. Also contributing to the economy is aquaculture, and even film and television production.

Now that you know some fast facts about Hawaii, you can impress your friends! Get in touch with Hoku Hawaii Tours to book your next excursion.