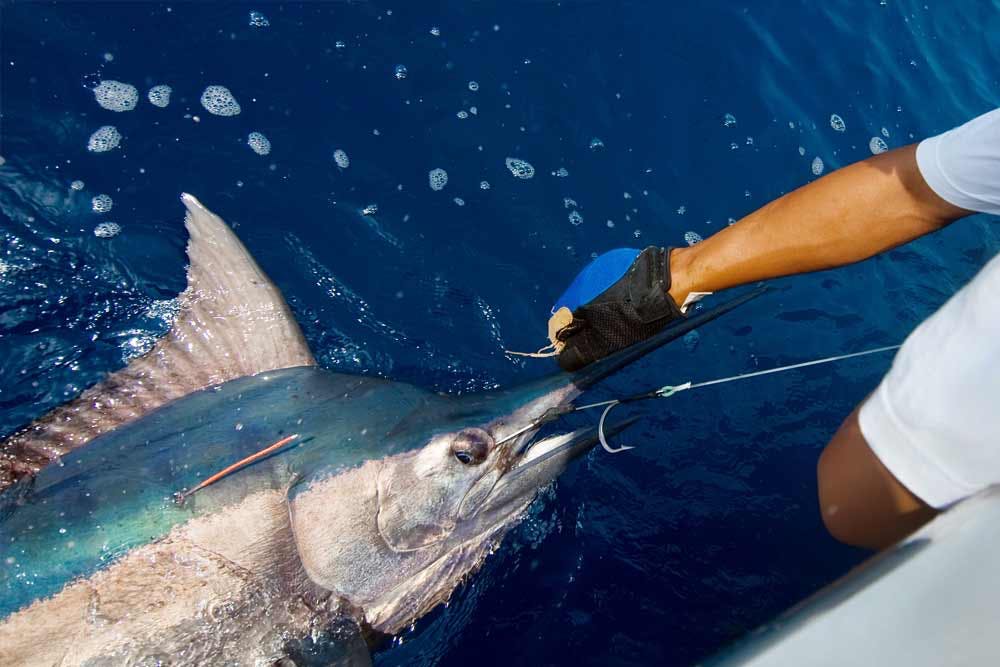 Earlier this summer, an angler reeled in a Blue Marlin off Kona clocking in at 1,368 pounds, just eight pounds shy of a 1982 world record. It took one hour to reel in the giant game fish, which he caught aboard a 21-foot skiff. Weighing in at 12 1/2 feet long, this Blue Marlin comes on the heels of a New York City teen who reeled in a 1,058-pound Marlin in nearby Kaaiwi Point, 10 miles up the Kona coast. This one was about 300 pounds short of the International Game Fish Association record.

Can you see a pattern here? Hawaii has long been known as a premier destination for big game fishing, and these recent hauls seem to prove that point. They just keep getting bigger! The most recent catch by angler Guy Kitaoka at the end of July netted him a female Blue Marlin thought to be between 18 and 26 years old. This is pretty old, even for females who tend to live a lot longer than males. However, it’s not every day that they weigh much more than 300 pounds so this was a rare find indeed. Ranked eighth in the largest ever on record, the largest Blue Marlin ever caught weighed in at 1,805-pounds.

There are many private fishing charters you can take to do some big game fishing off the Big Island of Hawaii’s Kona Coast, considered the central hub of sport fishing. Why? Because the Kona Coast is parallel to a large drop-off in the Pacific Ocean that plunges thousands of feet to the ocean floor. This is a playground for fish of all kinds, especially the larger fish such as:

If you enjoy the thrill of hooking into a big game sport fish, Hawaii is the place to do it. Anglers from all over the world come here to bag a trophy fish. Hawaii is a legendary destination among fishermen of all kinds, and many big game tournaments are held here every year, most notably the Hawaiian International Billfish Tournament. Any fish larger than 1,000 is called a “grander,” and usually involves a Pacific Blue Marlin. However, other fish can be big too such as ahi (yellowfin tuna), ono (wahoo), mahimahi (dolphin fish), and skipjack tuna. Any one of these fish can give you a run for your money, especially the incredibly strong tuna. Many fish are found year round while others are only seasonal. For example, the striped marlin is common only in the winter.

While the waters off the Kona coast have always garnered attention as the big game fishing capital of Hawaii, Oahu’s North Shore is gaining more ground each year. Complement your fishing expedition in Oahu with a tour from Hoku Hawaii Tours!