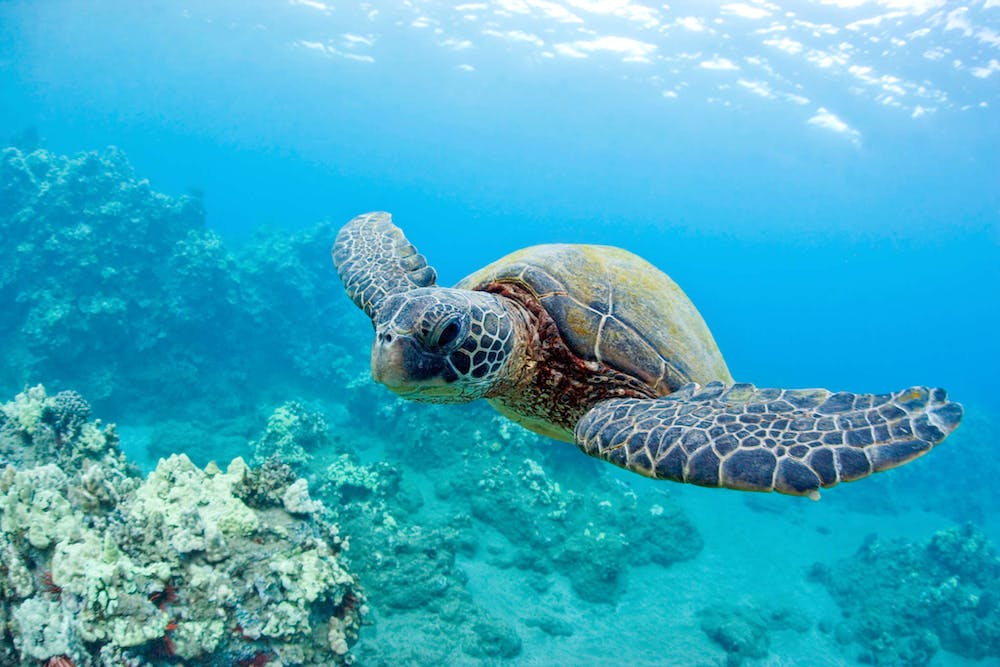 Boasting 100-foot visibility, the crystal clear waters of Molokini Bay give you up close and personal access to some of the most abundant marine life on Earth. Utterly teeming with marine life, Molokini is an ancient volcanic cinder cone situated three miles off Maui’s south shore. As a world-class snorkeling and diving site, you can only reach this hot spot by boat. What can you expect to see? Anything from humpback whales and green sea turtles to monk seals and eagle rays. You’ll likely also spots sharks, many varieties of rainbow-colored fish, and some pretty cool-looking lava formations.

You can catch a boat departing from Lahaina and Ma’alaea to get here, and it’s just a short hop, skip and jump from the mainland. You’ve likely admired Molokini’s crescent, quarter-moon shape in photos, as it’s one of the more photographed sights in Hawaii due to its stunning beauty as evidenced from aerial shots. Because of its protective shape, the area is relatively calm because there are no strong currents and large waves here. Home to 250 species of fish, the bay is a must-see for divers and snorkelers of all ages. However, the island itself is off-limits to visitors so don’t even try. Also, refrain from feeding any of the marine life, no matter how tempting.

There are many areas popular with visitors, the most common being in the center ring of the bay. Others swear by the backside of the crater where the crowds aren’t as thick and you can dive down to 300 feet or so. Don’t miss a visit to Turtle Town here, affectionately named for its large colony of native green sea turtles. The turtles aren’t afraid of humans so they’ll swim around you, but you should still exercise caution and don’t use sudden movements. They are, after all, wild animals, and will defend themselves if you chase them or otherwise attempt to harm them.

Whether you take a private catamaran, a powered raft or a sailboat, visiting Molokini Bay is a must on anyone’s to-do list in Hawaii. You can rent snorkel and dive gear at the mainland or bring your own from home. This volcanic atoll is a State Marine Life and Bird Conservation District, so heed all posted rules and warnings. The islet of Molokini and the 77 acres surrounding it became a Marine Life Conservation District back in 1977. As such, birds, fish, and all marine life as well as the reef itself are protected from fishing, collection, and destructive human behavior.

Check out MolokiniCrater.com for an interesting perspective and map of the bay area. The locals have named many of the areas according to the action you’ll find there, such as the Edge of the World, Flying Sea Cliffs, the Back Side, Shark Condos, and Reef’s End.

When you’re ready to explore the island of Oahu after a great day of snorkeling, call Hoku Hawaii Tours to set you up with an eco-adventure tour to complement your love of all things nature.