Explore the Culture Behind the Byodo-In Temple 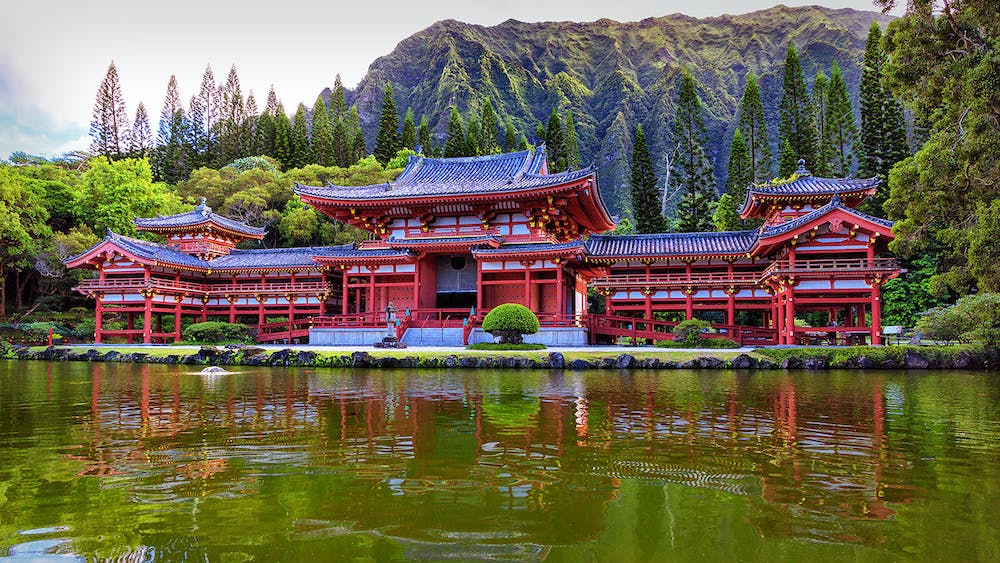 Nestled deep in Oahu is the treasure known as the Byodo-In Temple. This gem is located within the Valley of the Temples Memorial Park in Kahaluu, established in 1968. It was created to honor the 100-year anniversary of the first Japanese immigrants to come to Hawaii. The original is located in Uji, Japan – this one is a smaller replica of the actual temple. Let’s take a look at what this temple is all about, its history and why it’s a popular place to visit.

This non-practicing Buddhist temple brings people of many faiths to its doors. Anyone can worship here and all are welcome. Whether you simply want to meditate and pray or revel in the quiet serenity of the area, you will enjoy walking the temple grounds. You can even have your wedding here! The lush green landscape is a revered place for young and old, with sightings of wild peacocks and koi fish not an uncommon finding. The reflecting pond and other little crevices for meditation are highlighted by waterfalls and a variety of flora and fauna sure to make you feel at ease.

As the centerpiece to many popular TV shows such as Lost and Hawaii Five-O, the Byodo-in Temple carries with it an air of distinction. This is because it is a Hawaii State Landmark and should be treated as such. You’ll be asked to take your shoes off before entering the sacred temple to show respect of the religion. It’s open every day from 9 a.m. to 5 p.m. so it makes a great place to pop into for a couple hours in between tours, beach visits, and snorkeling excursions. It’s a fairly affordable way to spend an afternoon, too, as it’s only $3 for adults, $2 for seniors and $1 for kids.

The main attraction is Amida, the large golden Buddha for whom the temple is home. Considered the largest carved figure outside of Japan, this impressive statue stands nine feet tall, created by Japanese sculptor Masuzo Inui. Another highlight is the Bell House which contains a three-ton brass bell that’s rung just before you enter the temple in keeping with Buddhist teachings. This sacred bell is called bon-sho. Head to the meditation pavilion just behind the temple up on the hill if you need a few moments alone. The Tea House Gift Shop is just to the left of the temple and sells a variety of items such as miniature bells, statues of Buddha, local artwork, kimonos, and even Japanese bridal gowns.

Contact Hoku Hawaii Tours to find out how you can fit the Byodo-in Temple into your day of enjoying this most beautiful island.