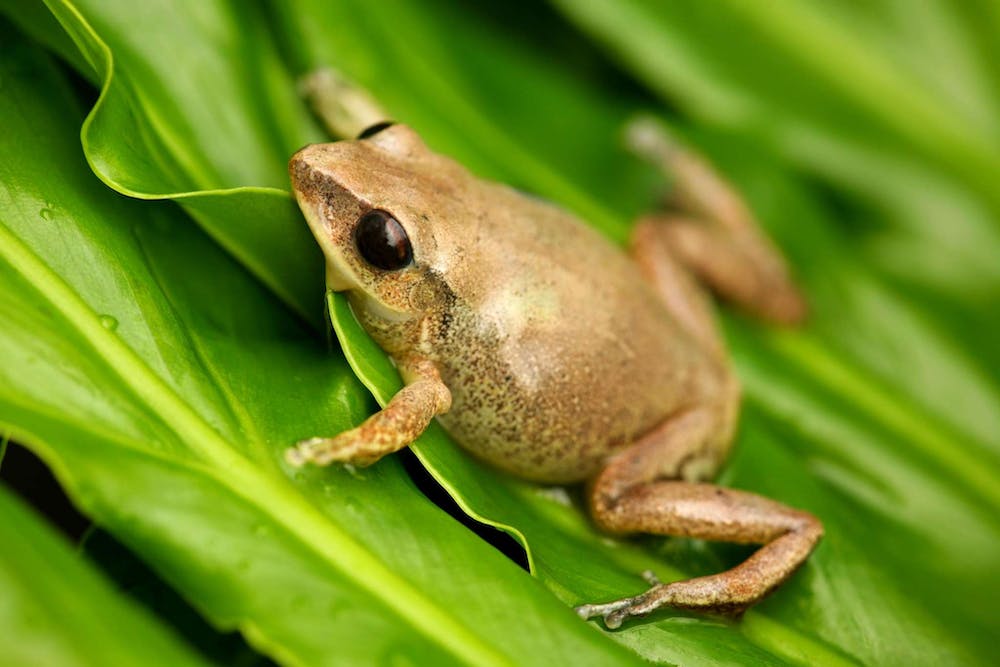 People outside Hawaii may not see what the harm is in a cute little frog. But residents here know all too well that coqui frogs are all but cute and harmless. They’re actually quite loud, invasive, and an endangerment to the delicate eco system of Hawaii. A coqui frog was caught on Oahu this past week much to the joy of residents in the Kailua neighborhood. This frog, about the size of a quarter, originates in Puerto Rico. The species is believed to have come to the Big Island initially in the 1990s from Florida, perhaps on a potted plant unbeknownst to anyone.

While not poisonous or directly dangerous to humans, the coqui has an extremely loud mating call and when they gather in the hundreds or thousands, they can cause many sleepless nights for area residents. Just like a neighborhood criminal watch, now there are coqui watches, with concerned residents calling in “sightings” of the frog to police. That’s what led to the capture the other day of the coqui frog in Kailua.

Because the coqui has no natural predators here, such as snakes or tarantulas, they breed and lay eggs, over and over until the cycle is nearly impossible to stop. With nothing to put a stop to their proliferation, these troublesome amphibians, a gray-brown in color, are likely to upset the ecosystem balance by eating bugs that are necessary to the pollination process. Aside from that, which would be bad enough, the sound alone is likely to drive anyone mad.

On Puerto Rico, the coqui is immortalized in songs and poems as a sweet-sounding gift to nature. In Hawaii, their mating call is loud, annoying and maddening to anyone who hears it night after night. At least that’s what the Hawaii Invasive Species Council says, along with immeasurable amounts of local residents. Hitting 90 decibels, the males can chirp so loud, the sounds is akin to the volume of a lawn mower. From dusk to dawn, the incessant chirping has been known to keep people awake.

The most recent culprit was captured by officials on Iana street after they received two separate calls regarding the coqui call. Captures like these are a dime a dozen recently, with police catching at least a couple every month. Making a male catch is preferred, as those are the ones who watch over the eggs. If the male is taken away, the eggs are vulnerable and left to be captured and eaten by other predators, making proliferation impossible for that batch.

While it’s not a crime yet to transport coqui into Hawaii, lawmakers have put out a call for a bill to make it a felony to bring a coqui into the state, even if it’s done by accident. It’s been tabled for now, but we’ll keep you posted!

In the meantime, get in touch with nature and check out other wildlife that’s not quite as annoying as the coqui. Call Hoku Hawaii Tours now to book your spot on an Eco Adventure Tour.